of mice and humans

This weekend in California Extravaganza played out, the great American Lutheran youth worker conference that has been mentioned earlier on this blog. Yes, the one I drew the mice for. I hung out in front of Twitter (hash tag #ext13) and during Saturday the mice and cheese jokes were all over it. I laughed out loud many times and so wished I could be there.
On Sunday, the last day of the event, tweets started to pour in on my page. Aimed at me, full of joy and gratitude, and a few mousy and cheesy puns. Total strangers had seen my mice, laughed at them, and now wanted to tell me how much they appreciated them. So wonderful. 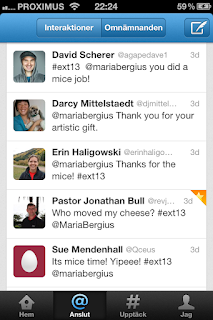 And then I saw the little video (and photo) where Dawn, the speaker, tap danced as pastor Patty (the mouse pastor) and I almost wanted to cry with joy. 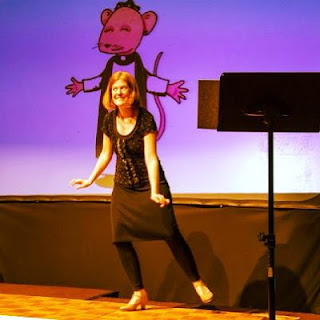 I often pray "Fyll mig med ditt goda, så att jag får bli till välsignelse" (Fill me with your goodness, so that I will be a blessing). Sometimes gifts, and the joy they bring, are more obvious than at other times. Thank you God, thank you Dawn, thank you Scott (who put us in touch with each other).
God is good. Even better than Västerbotten cheese. 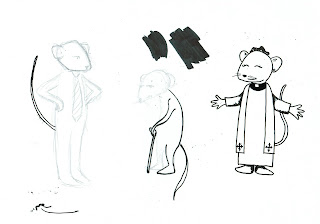 This is the time of year when best of-lists show up everywhere, and recaps are the melody of the day. I'll do one too, and I decided to do it in English so that those friends of mine who do not read Swedish very well (silly people) might be able to see what I write about them.

Because, yeah, this is of course a lot about friendship.

2012 was the year when I moved abroad. THE adventure, so far. We've been talking about it often, my husband and I, but it has always been one of those "maybe someday we'll"-things. This, however, is the year it happened. Sure, not to any exotic location, but away. To Belgium. Two foreign languages (formally three, counting the small German minority here too), a different sense of how things are done, new food and sights. A city, Brussels, we fell in love with and and the joy of living two hours or less from most parts of central Western Europe.

Strangely enough, 2012 was also a year of utter normalcy. I have baptized children, talked to people, sung the litany, baked bread and talked about God with teens. My husband has taught his pupils about the how's and why's of history, religion, geography and civics, and our daughter has gone to school, made friends and played a lot. And grown about a meter or two in height. We have all spent time with friends, made journeys and had good food. Been sick a little, have had fun. But all of this in a country where we barely had spent any time at all before moving here for three years.

The highs, then (except for the move):
TYCWP conference in Chicago: I not only met friends from before, but made new ones (Mariclair, I am so coming to see you in summer!) and strengthened other friendships (looking at you here, Vance). I hope to see many of you in Nashville this year.
The Poulsbo connection: Wonderful and amazing Cheryl and Paul. I love you, and I really look forward to seeing you in summer! It was great spending time with you, and getting to meet the others from Luther 500, and of course Kirsten and Todd.
Harry Potter experience: Holy cow. That place is amazing.
Choir: Joining the choir here in church in September probably helped me escape NO-I-don't-want-to-wake-up-VEMBER relatively unscathed.
New friends: Mattias, Malin and family, Gunnar and family. People at church, people in other places.
Old friends: I miss you desperately, but I am so happy for all the visits we have received. Nene and Loe, we already miss you. As a matter of fact, you totally should live here. The rest of you, get cracking. The Ormes couple are in the lead.
Obama: That election thing? Yeah, I wasn't really worried. *ahem*
Travel overall: 12 countries. Just sayin'. There won't be 13 this year.

I am pretty convinced there should be much more on this list.

The lows:
Violence: Come on, people. Stop killing each other. And stop saying stupid, hurtful and mean things, because that kind of vitriol also hurts, and makes for a great breeding ground for physical violence. And please get rid of those assault weapons.
Stupidity: Just because you're allowed to say something doesn't mean you should. Just because something is tradition doesn't mean it's automatically great. Think!
Disasters: Friends being hit by horrible misfortune, countries and cities hit by disasters. Please God, let this year be one of peace.

I don't want to add more, even though I am sure I could if I thought about it.

So, 2013, I am ready. Bring it! There will be awesome things happening this year, I know it.